A morning drive not to forget - Madikwe Hills Menu

A morning drive not to forget

A morning drive not to forget

This morning we set off to try and locate a male Leopard that had been walking our eastern fence line the past week, during the course of the week we have managed to get lots of tracks of this male but always manages to get away from us.
On rout to the area, about 20min into the drive we located a very large Black Rhino crossing the road in front of us, giving us a chance to get some amazing pictures with the sun rising in the distance. After about 15min or so he moved off into a thicket and we decided to carry on seeing if we could find fresh tracks from the night before of the leopard. 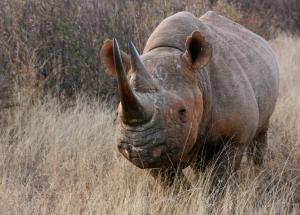 Not too long later we located tracks heading south away from the river. Lebo my tracker decided to follow up on foot as I moved the game viewer around onto the next road to the south of the tracks where I managed to relocate the tracks that Lebo was following, at this stage Lebo was not far behind and joined up with us. I spoke to the guests and said to them that I was going to join Lebo on the tracking as the tracks where leading into a very large block. So we set off, we returned back to the game viewer, about 40min later explained to the guest what the leopard was doing. As he was heading into an area that he likes to hide in ‘’not too far from where we had the last set of fresh tracks’’.
On rout we decided to drive the fence as there were some nice size Leadwood that he could climb into on rout, checking most of them we found nothing not even a track. There was another game viewer in the area trying to help us who then decided to pull out of the relocation. After a nice drink stop with Hot Chocolate and Amarula to warm every one up. I said to all we were going to back track and see what happens, not even 5min later we located a very young male lion all by himself who had moved up from the south eastern section of the reserve.

He started to move and we followed him, after some time I heard the pied crows in the one of the Leadwood start to go crazy and wondered what was going on, at this stage the young male lion was drawn in on the noise of the pied crows going crazy and started to move towards the tree, a few seconds later he was off and Lebo noticed the leopard leap into the tree to get away from the lion. 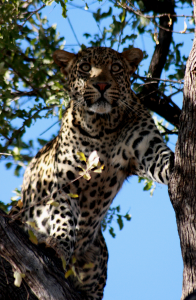 We slowly made our way to the tree which was not far away. And got our self’s into position for some amazing pictures of him climbing deeper into the tree. Becoming more settled near the top of the tree where he stayed for all of us in the area to have a good look at him. We managed to spend about an hour with him and left the sighting for others to enjoy. This was truly an amazing morning that none of our guest at Madikwe Hills will ever forget.