Setting off one afternoon in search of the Wild dogs, we had a good Idea where they were seen from the morning drive. On route to the area we where luck enough to get to see many other magical species, elephants, White Rhino, Giraffe and loads of zebra and wildebeest.
After some time we managed to locate on the Wild Dogs, resting in the shade of a large buffalo thorn.
After a few min the Wild dogs started to get active, running around and greeting one another, and set off running at a steady pace west. With the sun setting in front of them it was truly an amazing sight.

And they were off, the chase was on splitting up a heard of Blue Wildebeest. We had one Blue wildebeest coming straight towards us with 3 Wild Dogs behind and in the other direction another one running east with 2 dogs behind, we decide to follow up on the ones heading away from us , there was dust with the 2 wild dogs trying to get down a young Blue Wildebeest. 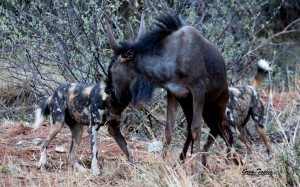 After some time the rest of the pack had also manage to take down 2 other blue wildebeest further west from us. Truly an amazing sighting.