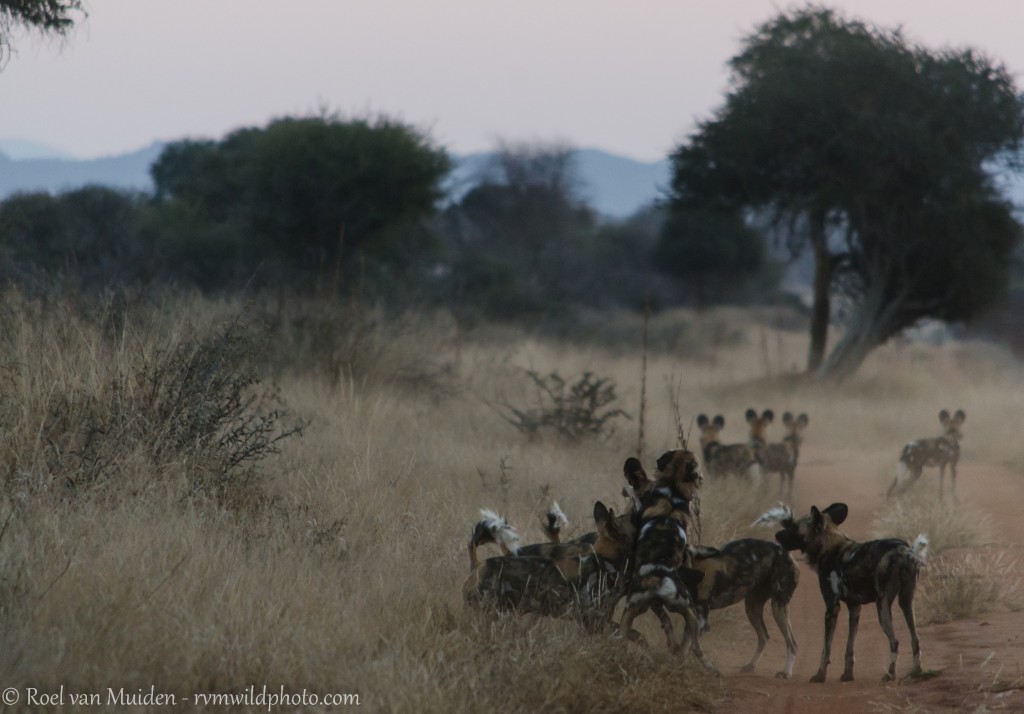 There are an estimated mere 3000 – 5500 Wild Dogs left in the wild on the entire continent of Africa. Only 500 of which occur in South Africa.These amazing hunters, Lycaon Pictus, have been persecuted for decades and this, combined with rapid habitat loss due to human population explosion, has dwindled their numbers rapidly. Madikwe Game Reserve is one of the few places where one can visit and stand a good chance of seeing these elusive creatures. 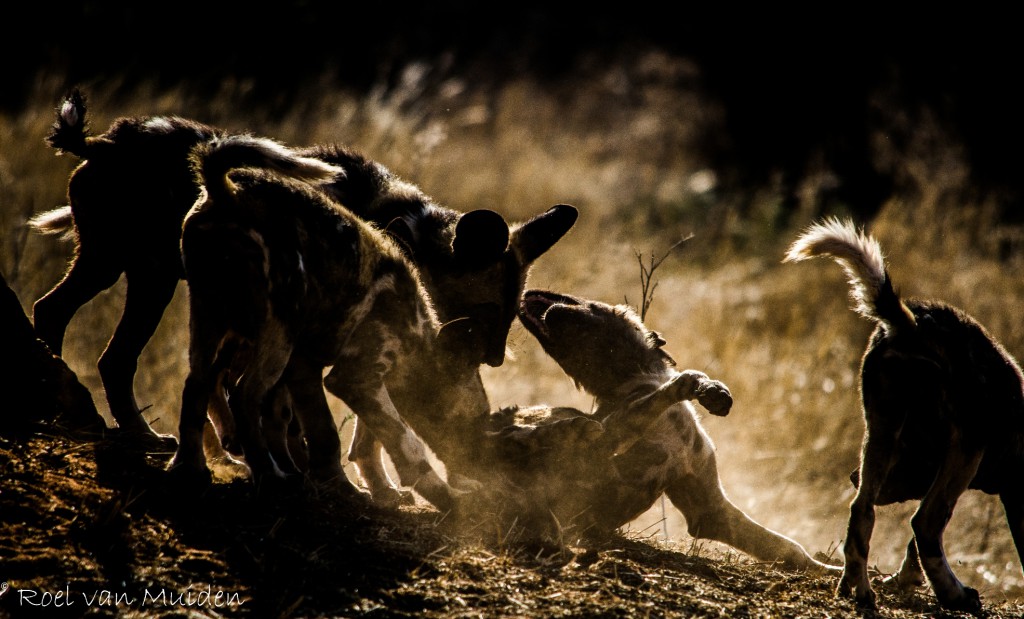 Wild Dog, African hunting Dog, Painted Wolf, are some of the names these amazing canines are referred as. They are not related to our domestic dog. They are in fact related to wolves but that relation lies three million years ago in an ancestor long since gone. They were originally categorised from a sample found in Mozambique and labelled Hyaena picta with the picta referring to their beautiful painted like coat patterns. Each coat pattern is unique to the individual. Their scientific name means, in fact, ‘painted wolf-like animal.’

They are highly social, extremely curious, and easily adaptable to circumstances. They are not ‘top dogs’, as it were, and can be killed by larger predators such as lions. Wild Dogs are an endangered species and highly conserved on the continent. 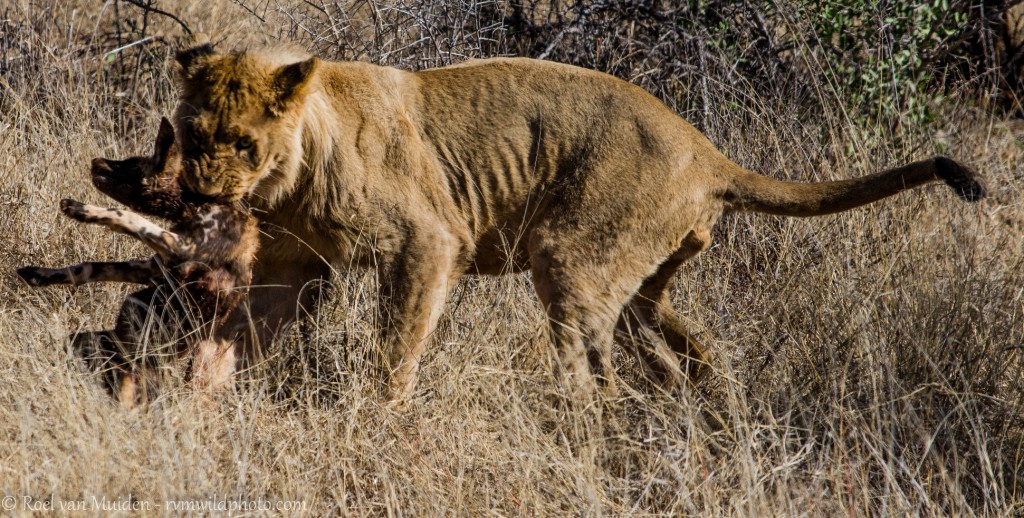 Persecution of the African Wild Dog occurred for many reasons, but one of the main ones, was that they were thought to be pests. These animals need large areas to traverse and when in contact with human habitation are known to predate cows, goats, and other livestock. They do not have claws like the felines, whereby when attacking their prey the claws get stuck-in, thus allowing easier take down. A Wild Dog’s claws are just like that of a domesticated dog and do not hold much traction except for running. Thus, the Wild Dog must either run their prey down to exhaustion of they disembowel the prey as it is trying to escape. This has lead humans to believe that they are quite savage and a ‘lowly’ predator. In my experience as a guide for many years, Wild Dog actually kill their prey more quickly than the cats as the disembowelment or running it to exhaustion and rapidly consuming the prey, means less agonising time being eaten while still alive as seen with lion and cheetah. 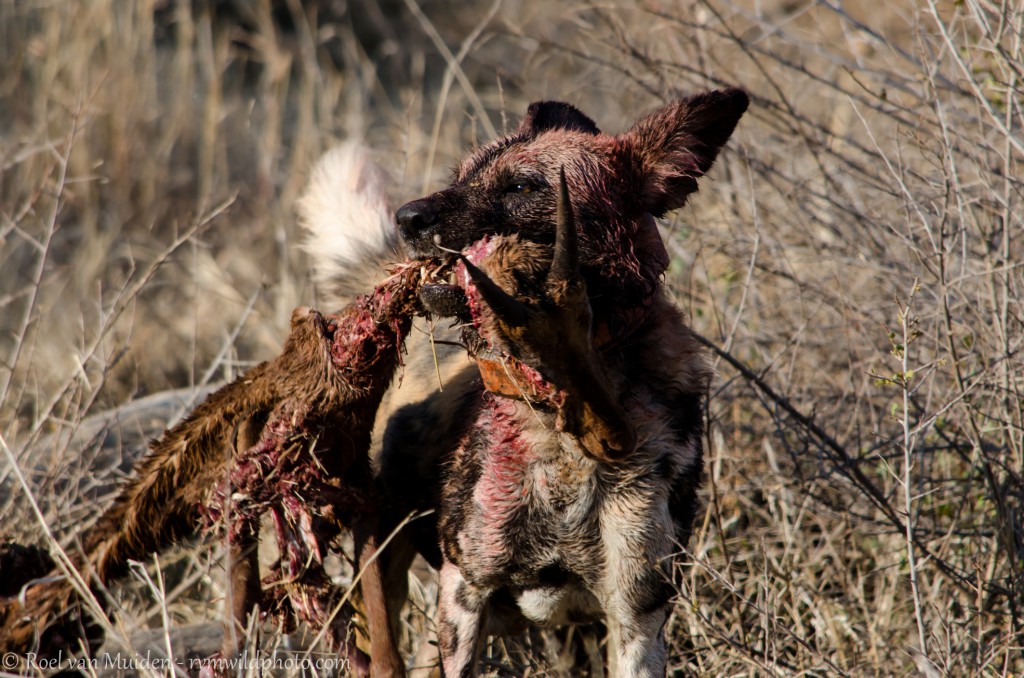 Madikwe Game Reserve has had one of the most successful relocations of Wild Dog in Southern Africa. The reserve was started just over twenty years ago after being cattle farm area for several decades. Before it was cattle farm, the reserve area was wild land with free-roaming wild game as in much of Africa. Wild Dog freely roamed this area along with lion, leopard, elephant, and many of the other species one can find on Game Drive while staying with us. Wild Dog at this point were seen in packs of fifty or more. Packs of this size do much better in the long run as they are communal hunters and all feed the pups of the alpha male and female. Wild Dog are susceptible to diseases such as Canine Distemper, Rabies, Mange, and Tuberculosis, so larger packs also do better as a few may pass due to these diseases but the pack as a whole will carry on. With Operation Phoenix coming into play as the largest relocation of game into a reserve in Southern Africa, the advent of Madikwe Game Reserve, our Wild Dog relocation was propped to do well. And so they did.

We have two packs on the reserve at the moment – The Northern Pack and The Southern Pack – with the total Wild Dog population numbering at thirty plus. We routinely have tremendous sightings of the pack interacting with other predators, hunting, killing, being fat and lazy, and patrolling. Although no sighting is guaranteed we are very fortunate to have such charismatic creatures to track and find whilst on Game Drive.