The "one" that always gets away. - Madikwe Hills Menu

The “one” that always gets away.

The “one” that always gets away.

The saying goes: “You do not look for a leopard in Madikwe. He or she will look for you”. That is what Samuel my Tracker, always say to me when the question gets raised by any of our guests. What can I do? I just sit and smile.

It is just like I always say, the way you enter and respect the sighting, is the way the sighting will treat you.

We heard a call over the radio that a female leopard has been spotted at Tlou dam / Matla clearing area. Samuel and I sat for a moment and decided that we are going to give it a go. What have we got to lose? We can always fall back on the saying: “She was the one that got away”.
As we listen to the radio on our way there, it sound like an on- off sighting. Then they see her, and then she is gone. She was trying to hunt some impalas. It sounded to me that the guys didn’t give or allowed her enough space to casually move and ambush her prey.

Eventually she was spotted close to the impalas. She then moved out of the area and so did the vehicles. Now it was our turn….. She was still on the move, so we positioned ourselves in such a way that she would walk right past us. 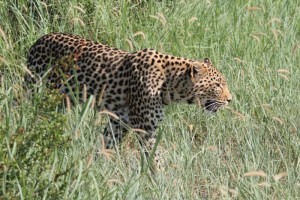 When she got to the back of our vehicle, she crouched down. I started the vehicle to reposition for a better view; however she shot up into the bush behind us. Samuel thought I gave her a fright and she ran away from the noise of the vehicle.

As we repositioned, we got to see her face again. She lifted her head up and in her mouth we saw a scrub hare! She did not run away from us! She made a kill right behind our vehicle! Wow, how awesome! 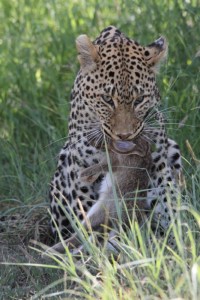 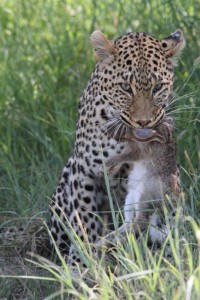 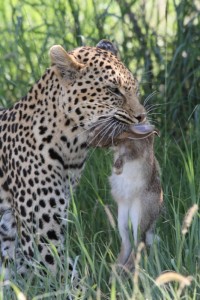 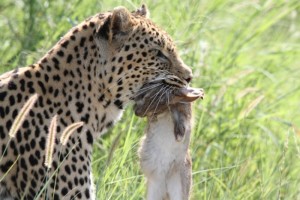 No more talking. Just have a look at the photos. Enjoy them! 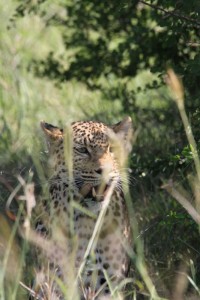 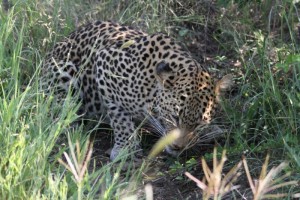 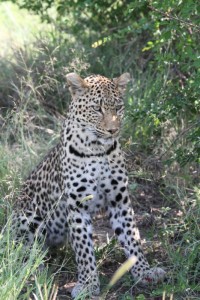 After she finished her snack, she got up and walked pass us as if nothing happened. 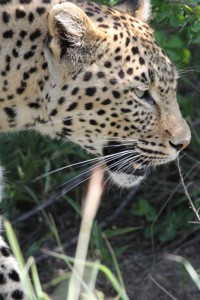 Until next time old girl, thanks for the thrill!!

4 thoughts on “The “one” that always gets away.”